Part-Box sponsored Julle Racing have raced their final races of 2019.

Kevin got off to a great start to the race in Meissen, Germany, the big 400 m. Track matched 100% to our starting setup and it gave a heat victory in the first heat. However, he had to start on the outer gate in heat two and was pushed very far into turn 2 and hit the barrier very hard.

He stayed on the bike and got a 3rd place, but it had given a little respect for especial Ukrainian and Polish riders. Kevin ended up in a nice 9th place with 7 points and got a lot more hair on his chest. 😊 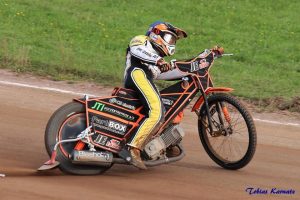 The following weekend Club Championships were to be run in Esbjerg Motor Sport Auto and the team started in a Fiat x1 / 9 with a 2.0 liter Toyota engine with 215 HP. ( Black Top )

Søren had to try if he could win his 10… club championship in the club and Kevin had a one-day license so he could drive the car in the junior class.

After 3 good training laps for both Drivers the start of the first heat went on, Søren took the start and led to turn 3 where he had problems with the steering and had to run to the finish in 5th place.

Kevin also took the start in his first heat and led the heat the first two laps where he was overtaken by Niki Hansen in his Seat. After the heat, we could see that one support arm had broken out of the body and we both had to pull out of the race.

However, it was still a fun and enjoyable day on our home track.

One of our new sponsors here in 2019, TRANSLYFT has visited our workshop and made a case on their website about the use of their / our new lifts.

There will be a video later on, that was filmed during our work on the speedway bikes.

We would like to send a big THANK YOU to all of you who have supported us in 2019 and look forward to continue the good cooperation in 2020. 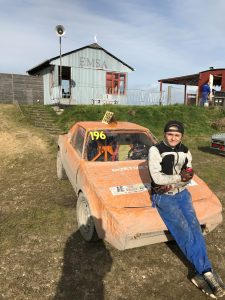 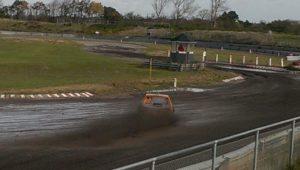 It's a new season and Kevin is Ready!